The Award Ceremony for APMOPS 2012 First Round was held at 2:00 pm on Wednesday, 23 May 2012 at Singapore International School @ Cau Giay, Dilmah Building, Duy Tan Street, Dich Vong Hau Ward, Cau Giay District, Hanoi. There was presence of representatives from Ministry of Education and Training, Department of Education and Training, Singapore Ambassador to Vietnam Simon Wong, Management Board of Junior High Schools, media, parents and students. 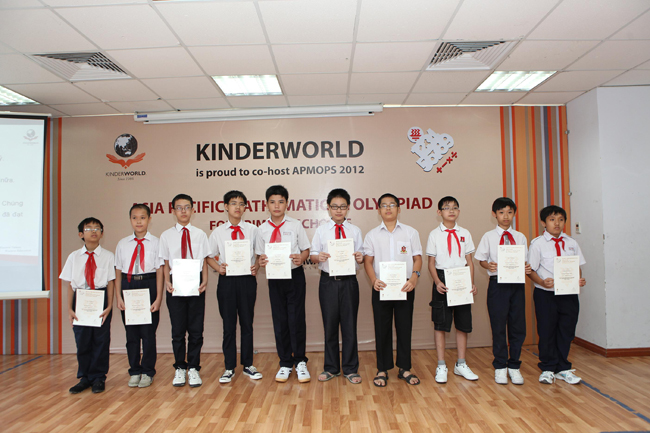 Top ten Vietnamese students of the APMOPS 2012’s First Round

Of the 512 students in Vietnam in APMOPS 2012, 319 students come from Hanoi, 117 students from Da Nang and 76 students from HCM City, Binh Duong and Vung Tau. The top ten qualifiers from the First Round are invited to participate in the Final Invitation Round with other participants from Asia Pacific region to be held on Saturday, 26 May 2012 at Hwa Chong Institution in Singapore. KinderWorld Group sponsors return air tickets to Singapore for the top Vietnamese students who are selected to take part in the Invitation Round. Other living and transportation expenses during the students’ days at Singapore to participate in the competition are covered by Hwa Chong Institution.

Hwa Chong Institution, Singapore has granted the Certificates for APMOPS First Round in Vietnam for students sitting APMOPS 2012 with the following results:

Below is the list of top ten students being invited to participate in the Final Invitation Round in Singapore and receiving Platinum Certificate:

KinderWorld Kindergarten and Private School JSC has co-hosted APMOPS with Hwa Chong Institution for the fourth time in Vietnam. The competition has earned attraction of many students, parents, teachers as well as the mass media. The Certificates gained by Vietnamese students after the First Round of APMOPS 2012 are not only an honor achievement and encouragement for students but also a crucial contribution to the development of Vietnamese education industry as well as international education relationships.